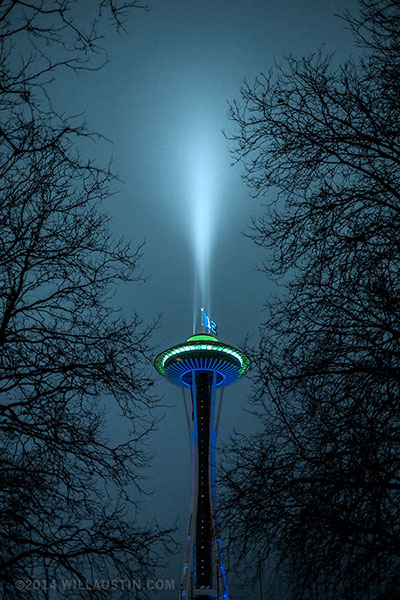 A superbowl appearance changes everything.  A city known for airplanes, software and coffee has all of a sudden transformed into a new suit of colors and is dotted (ok, smothered) in the number 12.  We aren’t considered a sports town, with so few championship appearances this is understandable.  But now that has changed in a big way.  At the grocery store the deviled eggs and cupcakes are Seahawks blue and green and the employees are all wearing Marshawn Lynch, Russel Wilson and Richard Sherman jerseys.  The T-mobile, Boeing, Amazon and many other buildings are lit at night in the blue and green.  Skyscrapers have the number 12 lit in their windows.  And best of all, the Space Needle flies the 12th man flag and is lit accordingly.  It is quite a sight!  I made the image below the night we won the NFC championship.  This street near the Seattle Center was deserted but there was an ongoing party downtown and in Pioneer Square.  For those interested in the technical aspects I took this with my beloved Fujifilm XE-1 and the 35mm f1.4 lens handheld at ISO 3200.

I know that sports aren’t the most important thing in this world, but it is great to see the community come together.  For me it is bigger than that.  I love football, always have.  I remember once at the age of 8 or so when my dad and I were driving into Seattle via the I-90 bridge and he pointed at the Kingdome construction site and said “Son, someday they are going to play pro football in there!”  I followed the Seahawks from day one.  We had some friends and neighbors on the team and I met many of them as I was growing up (Steve Largent, Jim Zorn, Norm Evans, Ron Coder, Ken Hutcherson, Sherman Smith, etc.).  I also played up until the high school level, but my lack of speed and 125 pound frame was somewhat of a limiting factor.  But this Seahawks team is special, they are so much more than football.  It all starts with the winning attitude of the coaches and the quarterback Russell Wilson.  They exude a level of confidence and surety of purpose that seems to border on mania at times.  Even more than all the records set, and the wins tallied, I think this sentiment has gotten a hold of the community as well.  And in a few hours this drama will play out in front of many millions all over the globe.  With apologies to my friends and family in my birth state of Colorado, Go Hawks! 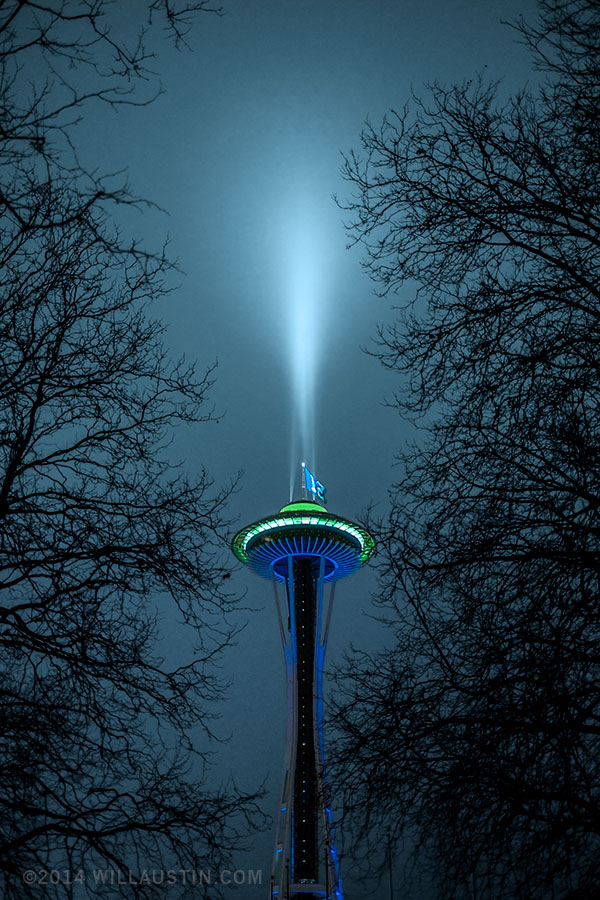